Seeing this web page (NEW LAMBDA @ Neocities) and seeing that there's another person on the internet who likes to make petz hybrids inspired me. So I made this page to show off my own petz hybrids.

Here's how you can make bold and italic text.

I gave all of these petz names that start with "a", the 3rd gens "b" names, etc. 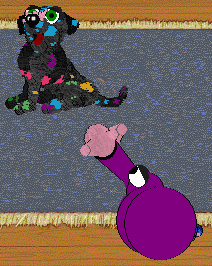 Calico x Dubwool. They are large.

Chinchilla Persian x Gouldian Finch. Some of them have unusual dark sclera. 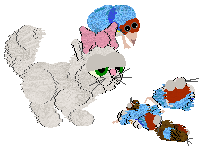 The cat mom and bird dad with their tiny babies.

All gen 2 petz. (There are also a pair of 2nd gen Folk Rats in there.) Carolyn's Oddballz in Petz are older breeds, and unusual colors don't pass down correctly. VPZ's finch is newer, made after some 2nd-gen problems had been solved, and the bright colors pass down but don't mutate.

Catsheep x purebred Folk rat birth certificate. Two of them have seem to have mouse ears on top of their horns.


Catsheep x mixed breed oddball. You can see that the 3rd gen is where things start getting weird. The Walret x Norvil hybrids looked pretty normal aside from the missing eyes, but two of the petz in this 3rd gen litter have a single tiny eye atop an eyestalk, which is pretty awesome.

Posing for the camera, this cat has floating mouse ears, and the tail is in a weird location.

Weird anatomy. The one on the left is strangely aesthetically pleasing to me; somehow it reminds me of a pigeon. Like a pigeon crossed with a weird kind of raccoon, due to its whiskers, pointy nose, dark ringed eyes, and bushy tail. The one on the right has a head that comes apart when it moves...


All the 3rd gen hybrids 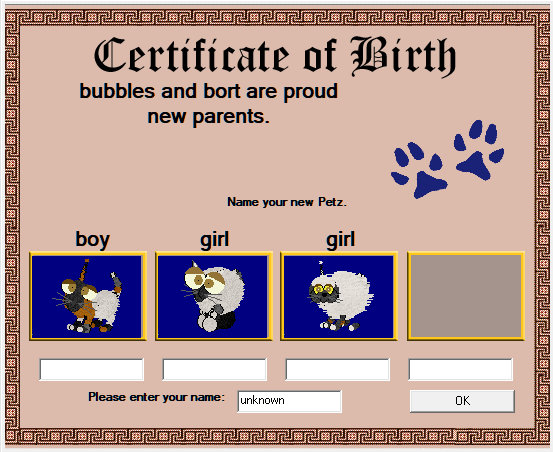 All of the 4th gen hybrids standing in a dense pile. With these cats, I finally decided to stop trying to come up with random words, and started using behindthename.com to look up names. All 4th gens have a name that starts with "C", and 4th gen siblings have names that share a 2nd letter. They aren't as aggressively weird as the third gens; instead they have a more balanced kind of weirdness. 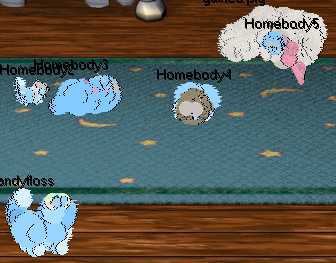 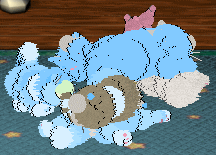 Chinchilla persian x Mini fluffies. I put a lot of pictures because they were very cute... These are special to me because not only were Chinchilla Persians my favorite breed, Carolyn's Mini Fluffies were one of the first breeds I downloaded as a kid, but they were mute, so I stopped playing with them. I assumed they were just broken. Now I am an adult who knows how to read readme.txt files, and the sound works! Such a deep meow for such a tiny cat! These two were so in love that they decided to make another set of babies as soon as I made the first ones grow up.

...I couldn't think of good names, though. (They're still adorable.)

Sea Urchin x Hyena litter, grown up via PetzA. The one in the center of the room is my favorite. Her name is Spike :) 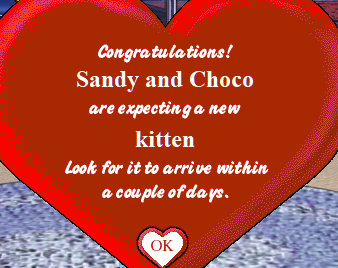 Then two of them decided to do this while I was looking away...

For unknown reasons, their kitten was huge.

He was born the same size as his mother....

She also REALLY likes to do this for some reason. She'll pick him up and rub him on the ground, almost as if he's stuck in her mouth and she's trying to dislodge him, then pin him on the ground and gnaw and lick him some more.